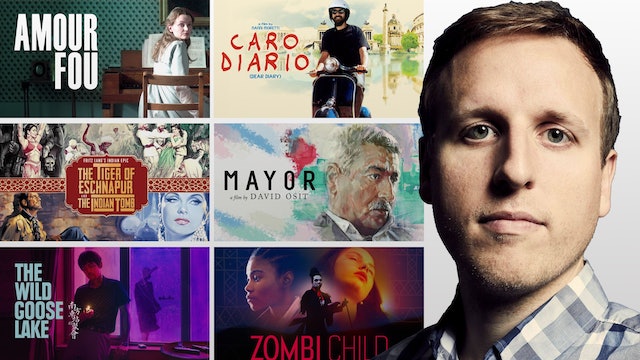 JORDAN RAUP is the co-founder and editor-in-chief of The Film Stage, a Rotten Tomatoes-approved critic, and the Senior Marketing Manager at Film at Lincoln Center. Track his obsessive film-watching on Letterboxd.

AMOUR FOU
Recently stepping up her scope with Little Joe, Austrian director Jessica Hausner’s previous feature, AMOUR FOU, is her most formally staggering and impressive work. Tackling quite an ambitious, precarious task––how does one depict (and even find humor in) a tale of a suicide pact?––Hausner does so with an exacting, meticulous vision, trapping her characters into the confines of a prescribed life with little room to escape the borders of her frames. In capturing this true story of Heinrich von Kleist and the terminally ill ​​Henriette Vogel, Hausner exhibits a distinct, painterly quality to convey this wholly unique dark romantic comedy.

CARO DIARIO
One of Italian director Nanni Moretti’s greatest achievements is his 1994 Cannes Best Director winner CARO DIARIO. Newly restored, the triptych is bursting with humor, doubling as a gorgeous travelogue throughout locales of his native country. Beginning with Moretti galavanting throughout Rome on his scooter as he ponders about film and culture, culminating in a real-life health scare, this is a movie exuding personality, warmth, and introspection that finds the joy in all things.

FRITZ LANG’S INDIAN EPIC
One of Austrian master Fritz Lang’s final contributions to cinema was the epic, two-part adventure known as the Indian Epic. Comprised of 1959’s THE TIGER OF ESCHNAPUR and THE INDIAN TOMBh, the double feature marked a return to German productions for the director after a long stint in Hollywood, though exteriors were shot on location in India, evident in the eye-popping Technicolor grandeur on display. Following the love triangle between a German architect, the Indian maharaja he is tasked to build infrastructure for, and a dancer, both films are pure, unadulterated serial fun with no shortage of dazzling setpieces. While “late style” has often been synonymous with a more colorless quandary into the meaning of life, it’s somewhat refreshing to see a director like Lang conclude his career with such an entertaining serial throwback.

MAYOR
A deeply immersive documentary of a city in crisis, David Osit’s MAYOR examines the inner bureaucratic works of Ramallah, the Palestinian city in the central West Bank located mere miles from Jerusalem. Taking a more micro approach than an expansive Federick Wiseman film, we specifically center on the city’s Christian mayor Musa Hadid and his unwavering fight for his people to find a home as the Israeli–Palestinian conflict wages on. As the life-or-death stakes increase due to Israeli forces, MAYOR evolves as a comprehensive, empathetic look at a figure who has given his all in the name of public service.

THE WILD GOOSE LAKE
Diao Yinan followed up his Golden Bear winner BLACK COAL, THIN ICE with another genre outing, the Cannes competition premiere THE WILD GOOSE LAKE. Once again flipping the script on the crime drama, the Chinese director takes a relatively simple gangster on the run plot and adds a universe of stylistic wonder and astounding poetry to his rain-soaked nocturnal odyssey. From unforgettable motorcycle action to haunting images of wildlife, this neo-noir is a prime example of unparalleled formal flair.

ZOMBI CHILD
Exuding an atmosphere in his work like few others in contemporary cinema, Bertrand Bonello’s ZOMBI CHILD is a slippery, evocative two-hander. Capturing both a Tourneur-inspired journey of a man brought back from the dead in 1962 Haiti and, in the present-day, his granddaughter as she bonds with a group of girls at her Parisian boarding school, the film has the set-up for a run-of-the-mill horror tale. Yet, as one might expect, Bonello doesn’t give into expectations, instead crafting a mood piece that explores colonialism, witchcraft, generational trauma that properly leaves room to reflect on its masterful images rather than trying to suggest answers for the insoluble.