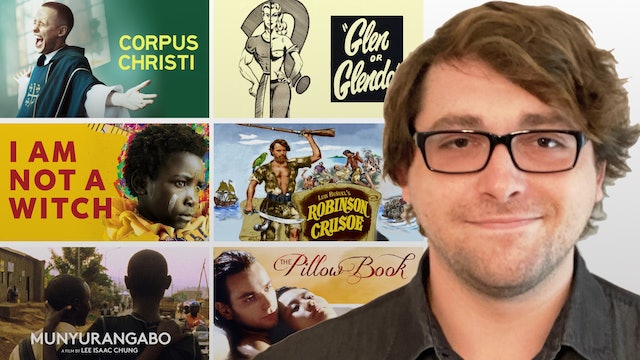 MATTHEW MAHLER is an amateur human trying to survive life, in addition to being lead editor and critic for MovieWeb, which first went online in 1995. You can find his interviews, reviews, and editorials at movieweb.com/author/matthew-mahler.

CORPUS CHRISTI
A modern masterpiece from Poland, the premise of Mateusz Pacewicz’s script for CORPUS CHRISTI could’ve become a silly, saccharine flick in the wrong hands – a young man, recently released from prison, gets mistaken for a priest by the vicar of a small town, who places him in charge of the parish during a medical absence. Fortunately, in the expert hands of director Jan Komasa, the inherent humor of this ‘mistaken identity’ plot isn’t exaggerated; instead, CORPUS CHRISTI is a deeply spiritual film about responsibility, community, and forgiveness. Unafraid to be ambiguous, Komasa has faith that his audience will truly believe in these characters, led by an astounding Bartosz Bielenia. With startlingly assured cinematography from Piotr Sobociński Jr. (who must have learned some techniques from his father, Krzysztof Kieślowski’s frequent DP) as the backdrop for Pacewicz’s beautiful dialogue, CORPUS CHRISTI is unforgettable, practically salvific perfection.

GLEN OR GLENDA
Ed Wood is often lauded (if that's even the appropriate word) as the best 'worst' director of all time. However, the massive cult status of his film PLAN 9 FROM OUTER SPACE (also on Film Movement Plus) tends to obfuscate a much more intellectually interesting, hilarious, and sometimes disturbing cinematic document – GLEN OR GLENDA. Six years before even SOME LIKE IT HOT could queer the silver screen, GLEN OR GLENDA took Wood's personal passion for transvestism to its artistic extreme. The film is a truly unique amalgam of noir aesthetics, Freudian psychoanalysis, and hybridized documentary, resulting in a veritable avant-garde public service announcement about the beauty of gender nonconformity. As Wood says in the 1953 film, “Give this man satin undies, a dress, a sweater and a skirt, or even the lounging outfit he has on, and he’s the happiest individual in the world. He can work better, and be more of a credit to his community and government because he is happy.” Problematic as some parts may be, GLEN OR GLENDA queers Uncle Sam in a truly radical, early way.

I AM NOT A WITCH
I AM NOT A WITCH maintains a distinct tone unlike anything else (even Nyoni’s award-winning short THE LIST didn’t hint at what she was truly capable of here). The film follows a stone-faced, quiet little girl named Shula who the townsfolk, government bureaucrats, and police all think is a witch when she simply shows up one day. The process of ostracizing and excluding women who are perceived to be threats is elaborated here, along with a darkly satirical take on small government and cultural baggage. Entirely unpredictable, simultaneously hilarious and disturbing, I AM NOT A WITCH is a film unlike any other, and announced the presence of a great new director (who has sadly not made anything since).

LUIS BUÑUEL’S ROBINSON CRUSOE
Luis Buñuel’s 1954 version of the Daniel Defoe classic offers a unique glimpse into what a more traditional Hollywood career would look like for the great Surrealist auteur. Coming off a string of Mexican masterpieces, nine films in just four years, ROBINSON CRUSOE was Buñuel’s first of only two English-language movies, his most successful until 1967, and arguably the best adaptation of Defoe’s book (perhaps second to ROBINSON CRUSOE ON MARS). The film is more streamlined and straightforward than what many are used to with Bunuel, but the director still makes ample space for some dreamlike imagery. He perfectly visualizes the escalating madness of the man stranded on an island, with help from Alex Phillips at the height of his cinematographic game, and of course a powerhouse, Oscar-nominated performance from Dan O’Herlihy. The film distills loneliness and mental deterioration to its purest cinematic essence.

MUNYURANGABO
Lee Isaac Chung has had a truly fascinating career, and the best part of it starts here. After Chung dropped out of Yale University (majoring in biology), he studied filmmaking and then accompanied his wife to Kigali, the capital of Rwanda, where she taught art therapy and he taught filmmaking. While there, he made the beautiful feature film MUNYURANGABO, the first to be in the Kinyarwanda language. It’s a quie, melancholic film about two young boys who steal a machete and run away from the city, each with different cultural and historical backgrounds (one being Hutu, the other Tutsi). MUNYURANGABO is a pensive meditation on friendship, history, and especially identity, which may be why Chung’s directorial intuition is practically perfect in every second of the film. An American born in Denver to South Korean parents, making a film in the Kinyarwanda language, Chung is a natural at feeling like an outsider, ostracized from any one identity. The backdrop of the Rwandan reconciliation after the 1994 genocide provides a stark historical context to these universal feelings. He may have explored these ideas further in his Oscar-nominated MINARI, but MUNYURANGABO finds Chung’s soul-searching at its most poignant and humanistic.

THE PILLOW BOOK
Nobody makes films like Peter Greenaway, partly because most of the great directors are beholden to the visual arts; Greenaway’s primary cinematic inspiration, on the other hand, is more textual. THE PILLOW BOOK, named after Sei Shōnagon’s famous diary from one thousand years ago, might just be the apotheosis of Greenaway’s obsession with language and the semiotic potential of cinema. The film follows Nagiko (an excellent Vivian Wu) as she becomes a model and seeks a lover, but her kind of visceral thrills come from being written on. When she meets a translator named Jerome (Ewan McGregor), Nagiko believes she may have finally met her match. THE PILLOW BOOK is warmer and more inviting than other Greenaway masterpieces, merging the intellectual with the sexual in truly stimulating ways. The excellent Brian Eno score and mesmerizing use of Tibetan ritual music accompanies Greenaway’s typically perfect framing and Sacha Vierny’s ingenious cinematography, resulting in unadulterated aesthetic bliss.