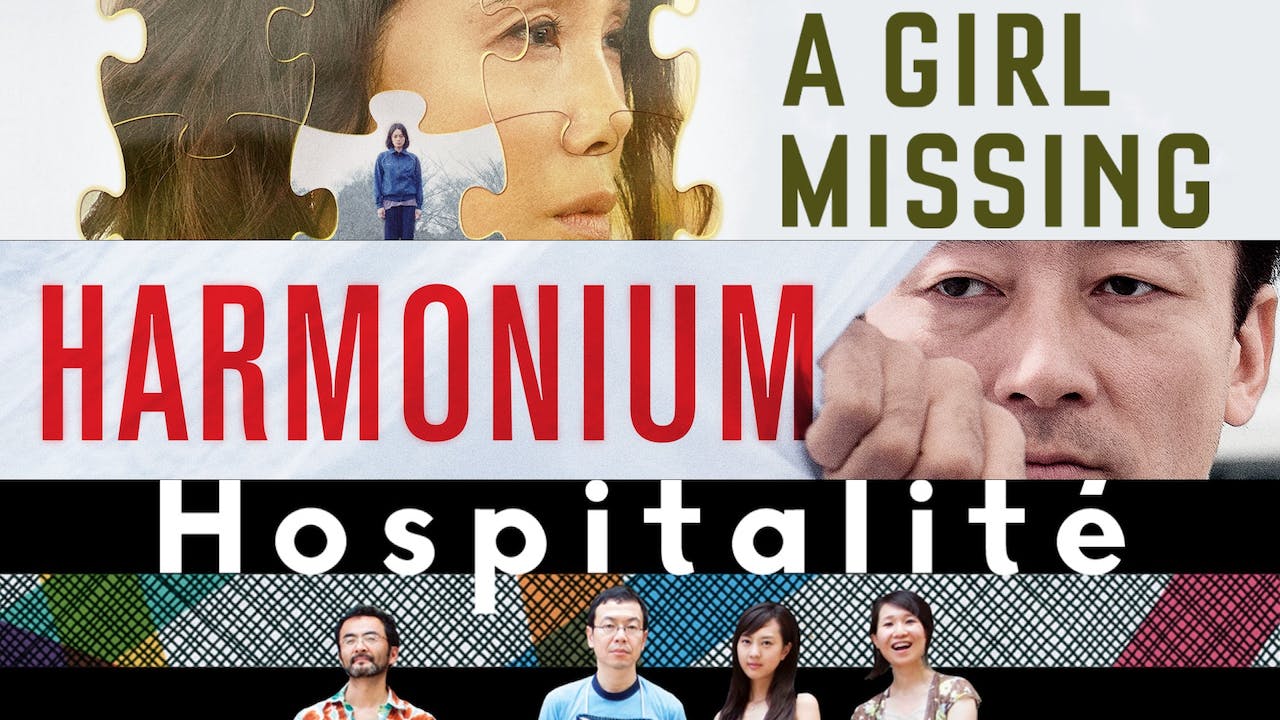 A GIRL MISSING
Koji Fukada's followup to the critically-acclaimed HARMONIUM (also available from Film Movement), A GIRL MISSING “is a satisfying slow-burn drama expertly told” (Screen Daily). Ichiko is a private home-nurse who has worked for the elder matriarch of the Oishos for years and regards them as her own family. Ichiko's quiet, routine life is shattered when a young member of the Oishos clan is kidnapped. When it is revealed that the kidnapper is none other than Ichiko’s nephew, her life begins to unravel in this taut thriller from one of Japan’s current cinematic masters.
DIRECTED BY KOJI FUKADA
JAPAN, FRANCE | 2019 | JAPANESE WITH ENGLISH SUBTITLES

HARMONIUM
Toshio (Kanji Furutachi) sees his seemingly ordinary life take an ominous turn when Yasaka (Tadanobu Asano), a mysterious friend from his past, arrives unexpectedly. Recently released from prison and in need of a helping hand, Toshio gives him a job and generously takes him in to live with his wife and daughter. Toshio soon regrets this decision, as Yasaka gradually disrupts the family before finally causing irreparable damage. Koji Fukada's acclaimed companion piece to his black comedy Hospitalite treads darker waters as it unravels a searing tragedy that has captivated critics and audiences alike.
DIRECTED BY KOJI FUKADA
JAPAN | 2016 | JAPANESE WITH ENGLISH SUBTITLES

HOSPITALITE
Mikio Kobayashi lives quietly with his wife, daughter, and divorced sister in downtown Tokyo, where xenophobic neighbors insist on them participating in community meetings, and the most exciting thing to happen is the disappearance of a pet parrot. But one day Kagawa appears, claiming to be the son of a financier who once helped Kobayashi's company. In return for his family's past help, Kagawa requests to move in, and Kobayashi's quiet lifestyle is quickly forgotten when Kagawa invites his Brazilian (or is she Bosnian?) wife and a myriad of eclectic and foreign visitors to join him in the cramped apartment. The Kobayashis are comically tossed about in confusion as Kagawa and his associates run amuck in their home. Kagawa, with the help of his visitors, manages to reveal old secrets and stir up the monotony of Mikio's former life with affairs, blackmail, and rampant youthful partying.
DIRECTED BY KOJI FUKADA
JAPAN | 2009 | JAPANESE WITH ENGLISH SUBTITLES